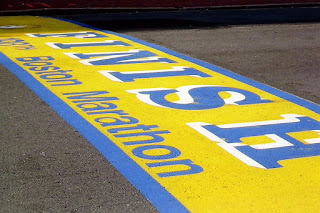 With all of the top 25 feeder marathons complete, the current trend for the 2016 Boston Marathon Cutoff is 91 seconds (90 if you're an optimist).

*Or, it could be higher (see the heading "Dirty Little Secret")

The Caveats:
The analysis assumes a lot of assumptions. I have outlined the objective and methodology on this page. Basically, I look at the number of people who qualified for the 2015 race, using the "feeder marathons". To qualify for the 2015 race, participants needed a BQ minus 1m2s. These races were all run last year. I then look at the same races for this year, and see how many people would qualify using the same cutoff.  If fewer people qualify, then I decrease the cutoff (make it easier to qualify), until the same number of people qualify as did last year. Conversely, if more people make the 1m2s cutoff than last year, I increase the cutoff (making it harder to qualify) until the same number of people qualify.


Table 1: Year vs Year, By Marathon

Now that the Boston Marathon registration is open - assuming the same proportion of qualified runners apply for the race (see objective and methodology) - there wouldn't be enough spots for everyone. We have to increase the cutoff so that we whittle the 36,289 people (who met the 2015 cutoff in a 2016 qualifying race) down to 35,239 the number of people who met the Cutoff for 2015.

Through a numerical modelling approach, the answer to the solution, of what the cutoff should be becomes 91 seconds.

Table 2: Projected qualifiers, from this years races, by AG based on an 91 second cutoff.

* And now for a dirty little secret...

As was noted earlier in this analysis, the Berlin Marathon for this year appears to be a large outlier, with a massive influence on the cutoff time. It is keeping the cutoff lower than it probably should be.


If I run the numerical model again without the Berlin numbers and a new cutoff such that the number of qualifiers is equal to 29,784... the result is ....

Please note, this blog is updated regularly. If you have come here via an external link, The latest BQ Cutoff is trending at 91 Seconds.